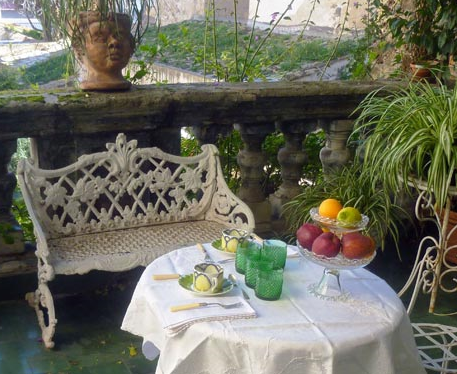 The location is Palazzo Ajutamicristo.

Guests will be personally hosted by the Landlady; she will show you the Palazzo, the ballroom, the XV loggia, and will tell you about the history and the stories of this Palace.

Later in the beautiful historical kitchen (the owners still use) you will spend a couple of hours with Mrs Wanda to catch all the secrets of the Sicilian cuisine, including the 'Cassata' !
Finally sit all together in the beautiful dining room to taste what you have prepared.

We will do our best to have a nice weather and let you have coffee in the garden terrace.

Palazzo Ajutamicristo takes its name after Guglielmo Ajutamicristo, a banker of Pisan origin who had it built for his family between 1495-1501.
The distinguished architect Matteo Carnilivari (architect of Palazzo Abatellis) was entrusted with the building of the Palace but, because of the expense, the initially grandiose plans had to be modified and the Palazzo was only partially completed.