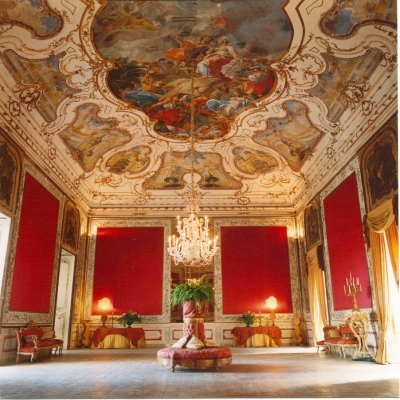 Palazzo Ajutamicristo takes its name after Guglielmo Ajutamicristo, a banker of Pisan origin who had it built for his family between 1495-1501.
The distinguished architect Matteo Carnilivari (architect of Palazzo Abatellis) was entrusted with the building of the Palace but, because of the expense, the initially grandiose plans had to be modified and the Palazzo was only partially comleted.

In 1588 Margherita Ajutamicristo rented the Palazzo to Francesco Moncada, first prince of Paternò, for an annual sum of 390 ounces. Soon afterwards he was to become the owner.

In XIX century the Moncada family sold the ownership of the palace to Baron Calefati di Canalotti and the Tasca d'Almerita family; the Calefati house still holds to this day its share of the property, while the other half was purchased by the local authority Regione Siciliana

The Palazzo
The Palazzo, which originally dates back to the late 15th century, has been continuously expanded and modified throughout the centuries.
Substantial restoration and preservation projects have been completed throughout the Palazzo.

Of particular interest is the frescoed ballroom ceiling representing "The Glory of the Virtuous Prince", painted by Giuseppe Crestadoro, which crowns the 200 sq. m. room leading to the flowered terrace.

Palazzo Ajutamicristo is listed as a National Monument and belongs to the Italian Historic Houses Association.

The Visit
The owners, living permanently at Palazzo, will personally receive the guests.

Duration: 1 hour and half

Including: private visit of the Palace received by the owners and drink

We can arrange at Palazzo private lunches, gala dinners and Sicilian cooking classes in the beautiful historical kitchen.

In the XV century loggia or the garden terrace, "Cortile del Petrosino", which open out towards two ample courtyards, flush with exotic palms,
oleanders and banana trees, we can arrange exclusive
refreshements.