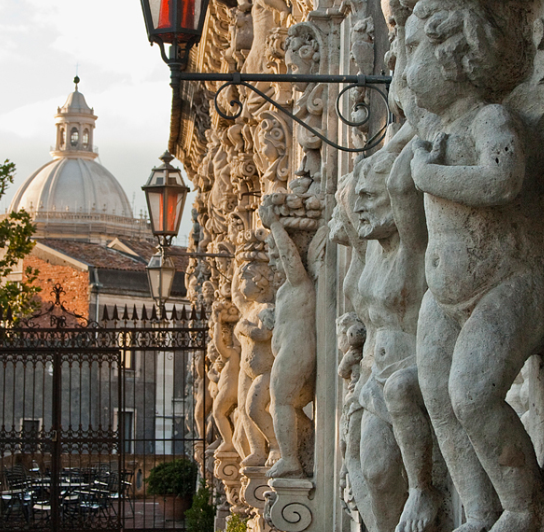 Discover Sicily from a inner luxury perspective. Let us introduce you in the historical houses, in hard-to-get private palaces being received by the owners.

Palazzo Biscari, the most magnificent private building in Catania, is unique in terms of structure, outlay and decoration. After the earthquake of 1693 destroyed nearly the entire city, Ignazio Paternò Castello III Prince of Biscari, obtained permission to build the new palace on the ramparts of the 15th century walls of Carlo V.
Ignazio died in 1700, leaving his son Vincenzo, fourth Prince of Biscari, to begin the structural work. The best architects in Catania at that time, Alonzo di Benedetto, Girolamo Palazzotto, Francesco Battaglia and his son Antonino, participated in the construction, which lasted more than a century.

The palace reached its greatest splendor under Prince Ignazio V, an eclectic man, a man passionate about art, literature, and archeology, and one of the most significant figures in the cultural life of Catania in the mid-1700’s. The prince, no common client, did not limit himself to dictating his needs to the architect, but he himself proposed models and architectural solutions inspired by what he saw in his travels.

The central courtyard of the palace is surrounded by constructions of various epochs and is dominated by the central double spiral staircase which leads into the most important part of the edifice.
A visit to the inside is found to be outside common interest.

After the entry hall which contains large canvases illustrating plants of the Biscari estate, one enters the grand salon, which brings together many devices of the Rococo style. All is light: the mirrors, the white doors, the shining floors of neapolitan ceramics.

Mirrors are placed above the fireplaces in their elegant niches, and reflect, and, in the allusive world of Rococo, evoke symbolically the fire whose god we find again in the Cabinet of the Gods, brought together to celebrate the triumph of the family name Paternò Castello in the ceiling fresco by Sebastiano Lo Monaco.

Quote from: on request